Report coyote sightings from your mobile or desktop device. The Coyote Sightings web app allows users to report sightings and the activity of the coyote when spotted. The reported coyote will geo-locate the sighting on a live map where you may add comments and contact information. Interested parties can also see the online map for the latest coyote sightings reported through the app.

If you encounter a sick, lethargic, injured, or dead coyote, contact the Los Angeles County Animal Control at (310) 523-9566, and an Animal Control Officer will respond to pick up the animal.

If you have any questions or concerns, or if you believe a coyote in your neighborhood is dangerous or has shown aggressive behavior, please contact the Los Angeles County Agricultural Commissioner Weights & Measures Department at (626) 575-5462 or the Code Enforcement Division at (310) 544-5281.

As a community, we will work together to coexist with coyotes and urban wildlife.

In case you missed it, you can watch a recording of the Wildlife Watch Forum held on April 27, 2022, below or at the following link: https://rpv.granicus.com/player/clip/4156

The forum featured the RPV Code Enforcement Division and representatives from the California Department of Fish and Wildlife (CDFW) and the Los Angeles County Agricultural Commissioner. The objective of this workshop was to raise awareness by bringing neighbors together to recognize and distinguish wildlife sightings, wildlife threats to public safety, and natural versus unnatural wildlife behavior, with an emphasis on coyotes. Attendees learned why it’s important and how to report coyote sightings in Rancho Palos Verdes. Attendees also learned what to do when encountering a coyote and how to successfully scare away or ‘haze’ coyotes using proper hazing techniques.

To view a PDF version of the Coyote Bulletin (PDF) click the bulletin below: 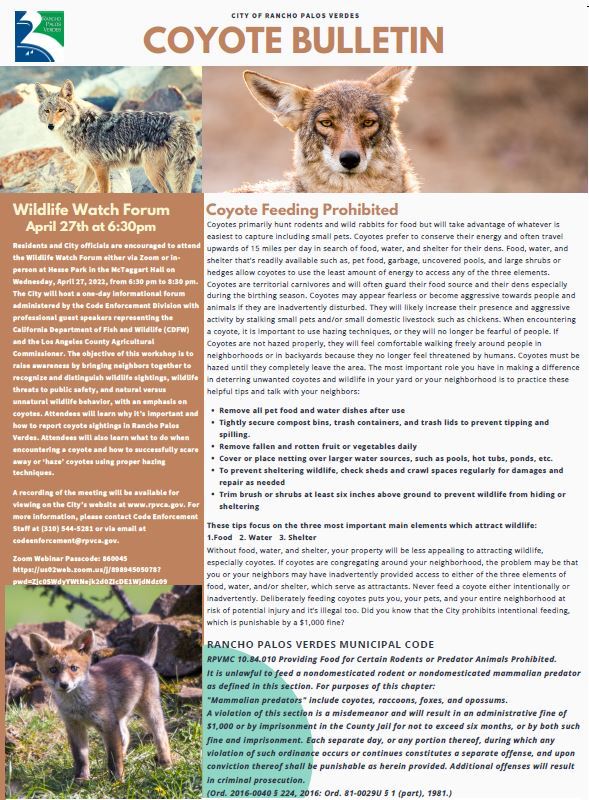 The city has been receiving reports of coyotes spotted in the canyons, hanging around near trails, and even walking down the middle of the street. Coyote sightings are not new in the city, as coyotes have been a part of the community since before its development. Coyotes are now found in every state except Hawaii. Coyotes mate once a year during January and February and will give birth to their pups from March through May. With that, the need for adults to feed their pups becomes important in the late spring and throughout the summer, thereby increasing their activity level during that time of the year.

Typically, as fall approaches, coyote sightings will taper off as the pups become independent and the coyotes are not as active. It is interesting that it appears coyotes will stabilize their populations as they will only have as many pups as their territory can support in food and water. In addition, any voids in a pack will be filled by transient coyotes.

Coexisting with the Coyote

So now that we know coyotes are here, how are we going to learn to live with them? Coyotes will generally avoid humans and are natural predators of mice, rats, squirrels, gophers, and other small animals. However, the presence of a free meal in the form of pet food, compost, or trash can lure coyotes into yards. A coyote who finds food in one yard may learn to search for food in other yards.

In addition, deliberately feeding coyotes is a mistake and against the law! Coyotes that are intentionally or unintentionally fed can become habituated, which can lead to bolder behavior when coyotes lose their fear of people. Coyotes may not make a distinction between their natural prey and the family cat or small dog. Without the lure of food, coyote visits will be brief and rare.

Here are a few suggestions you and your neighbors can follow to help avoid conflicts with coyotes and help keep them in their natural habitat areas:

What do you do when you begin to notice a coyote making an appearance in or near your yard? Most agencies recommend something called hazing. Hazing is a method that makes use of deterrents to move an animal out of an area or discourage an undesirable behavior or activity. Hazing can help maintain a coyote's fear of humans and deter them from neighborhood spaces. Using a variety of different hazing tools is important as coyotes can habituate to individual items, sounds, and actions.

The Humane Society explains the simplest method of hazing involves being loud and large; stand tall, wave your arms and yell at the coyote, approaching him if necessary, until he runs away. If a coyote has not been hazed before he may not immediately run away when you yell at him. If this happens, you may need to walk towards him and increase the intensity of your hazing. It is important to continue to haze the coyote until he completely leaves the area. You may need to use different tactics such as noisemakers, stomping your feet or spraying the coyote with a hose to get him to leave. In addition, you may want to carry hazing tools with you while you walk your dog. These include a whistle, squirt guns, or sticks or rocks that can be thrown towards the coyote.