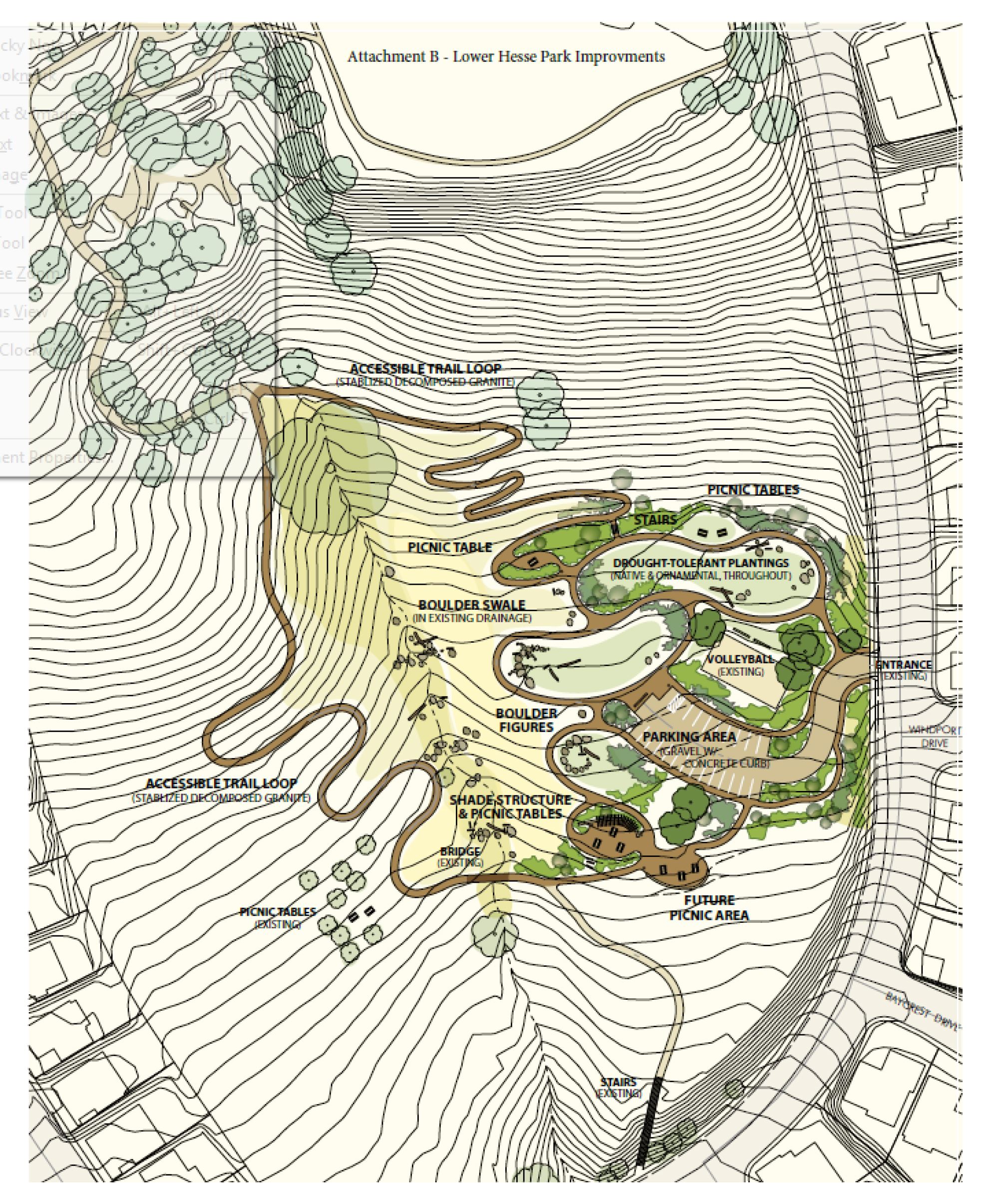 There will be a Groundbreaking Ceremony on Tuesday, September 19th at 5pm, please view Event Flyer (PDF)!

The RPV City Council awarded a Professional Services Agreement to Withers and Sandgren, Ltd. for the design of the Lower Hesse Park Improvement Project.

The purpose of the Lower Hesse Park Improvement Project is to enhance accessibility, recreational opportunities, and the aesthetic condition at the park. The City has worked with a landscape architect to perform site analysis, collect community input, and create conceptual designs of both Lower Hesse and Grandview Parks simultaneously.

Improvements to this area have been in a planning/design phase since 2005. Conceptual designs were prepared in 2011 which included extensive landscape and trail improvements and active elements such as a basketball court, tennis court, paved parking lot, and a small structure which would include a public restroom, staff office and storage. The City Council directed staff in 2012 to work with the Pacific View HOA.

Thank you to Noel Park, John Freeman, Les Chapin and Jim Moore of the Pacific View HOA for their assistance with this project.

A public workshop is scheduled at the John McTaggart Hall at Hesse Park on September 14th, 2015 at 7 PM, to discuss and receive public comment on a draft plan for lower Hesse Park. This project is scheduled to be considered by the City Council on October, 20th, 2015.

For more information about Lower Hesse Park, or the September 14th workshop, please contact Matt Waters at (310) 544-5218 or by email Matt Waters.

On November 16, 2010, City Council directed staff to complete the environmental review process for the Pacific Plan for Lower Hesse Park. View the concept plans (PDF). On July 17, 2012, after prioritizing capital improvement projects, City Council directed staff to work with the neighborhood homeowners association to develop a scaled down project that can be implemented in phases.

The City has completed the environmental analysis, and has determined that the project, as mitigated, will not have a significant effect on the environment. As a result, a Mitigated Negative Declaration (MND) has been prepared, and is now available for public comment. Public comments will be received by the City regarding the content of the MND, and must be received no later than 5:30 p.m. on January 31, 2013. The MND document can be viewed online (PDF). To view reports on the history of the project and past Council actions, please view the project history section at the bottom of this webpage. To learn more about the park improvement project, join the project listserve for Lower Hesse Park.

Public outreach performed by consultant, Mia Lehrer and Associates, and City staff included three community workshops during which community input was gathered and preliminary designs were shared. Staff also took public outreach tables to shopping centers and special events throughout the Peninsula to share information with the public and to gather input.

View a gallery of photos from the community workshops.

At the May 15 Community Workshop, the City's landscape architect led participants through a site analysis of both park sites to gather resident input.

At the July 17 Community Workshop, the city's landscape architect and city staff presented conceptual designs of the two parks and discussed traffic and circulation, park programming, and park character.

At the September 25 Community Workshop, Mayor Wolowicz, city staff, and the city's landscape architect shared conceptual designs of Lower Hesse and Grandview parks with the community and solicited feedback.

Staff brought a public outreach table to locations throughout the city to gather input from residents.

View a gallery of photos of the outreach table.

On July 17, 2012, City Council directed staff to complete the Draft Mitigated Negative Declaration for the originally designed Pacific Plan for Lower Hesse Park and to work with the local homeowners association to develop a scaled down project to be completed over the course of a number of years, to be brought back to City Council for consideration.

On November 16, 2010 City Council directed staff to proceed with the environmental review process for the Pacific Plan for Lower Hesse Park, and reopen the public outreach process for consideration of a skate facility.

After considering public testimony and the information presented by staff, the City Council approved the conceptual improvement plans for Lower Hesse Park and Grandview Park and directed staff to retain consultants to prepare design plans for these parks and to create opportunities for public input concerning the design of these community parks. Original conceptual designs were modified based on input received at two neighborhood meetings from individuals residing near the parks. The following modified plans were presented to the City Council at its November 17, 2009 meeting:

To address these goals, City staff performed an extensive visioning process, relying on public input and information from a variety of available sources including, but not limited to:

To receive electronic updates on the park improvement plans, including future public outreach opportunities, via email, subscribe to the Lower Hesse Park / Grandview Park Listserve group. Subscribe online. Inquiries regarding the park improvement projects should be directed to Katie Howe, Administrative Analyst, Recreation and Parks Department at 310-544-5260 or email the department.